Interest rates in the UK have been at extreme lows in the post financial crisis era, and sometimes it's hard to believe they will ever go up again.

Nonetheless, it is still important for investors to consider their future direction when choosing between different asset classes. Are interest rates likely to rise soon? What could possibly make this happen?

To find out what could make them rise, we need to look at what has kept them so low for so long.

On 5 March 2009 the Bank of England cut UK interest rates to 0.5% - the lowest level since it formed in 1694. The base rate fell to 0.25% after the EU referendum and has since risen to just 0.75%. These have been intentional moves from the Bank, to force savers to spend money. 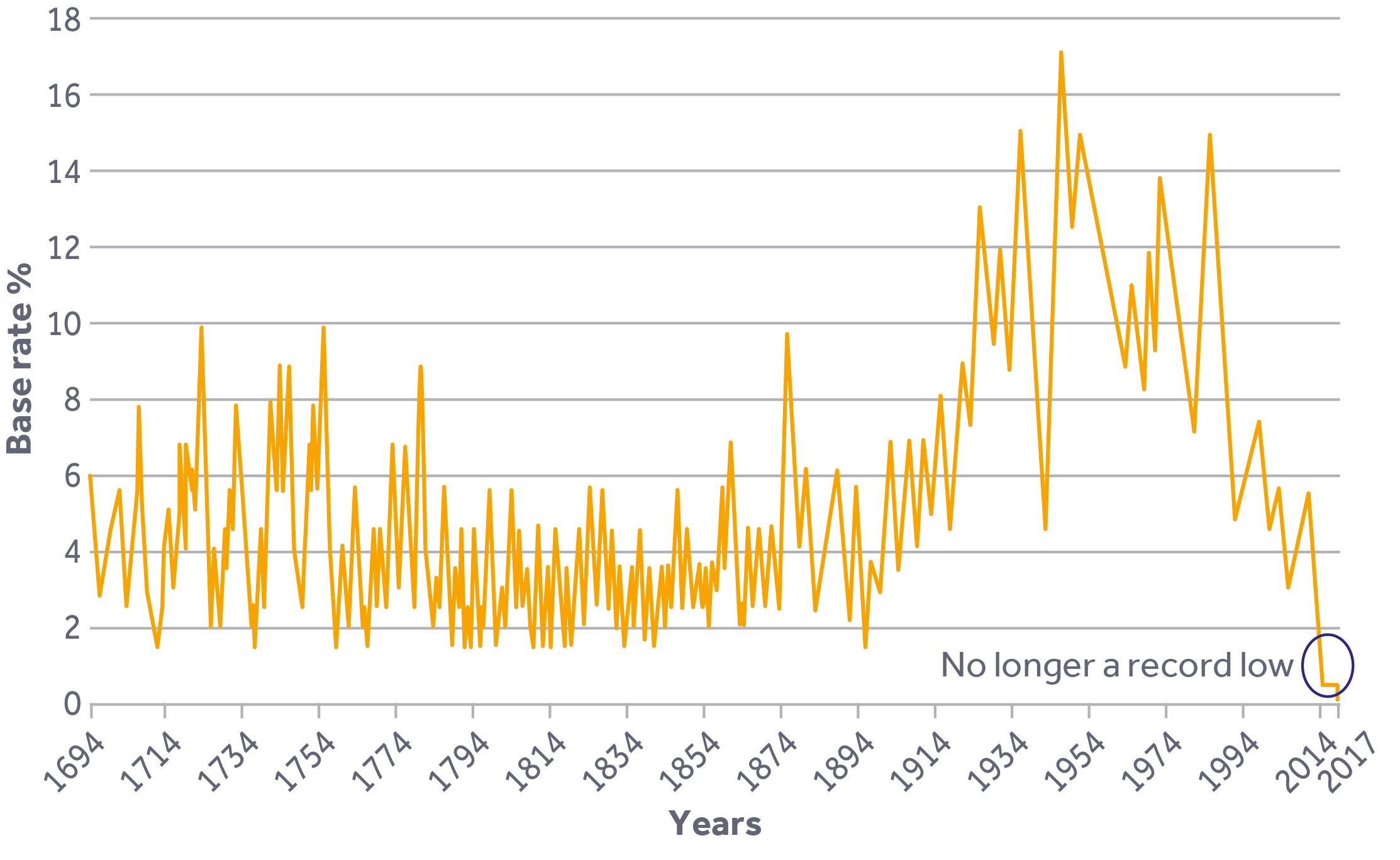 However, a decade after March 2009, we might have expected rates to have moved a little higher. We can't constantly keep spending, surely?

In fact, a number of structural forces are keeping interest rates low. To start with, while we still live in a world of volatile commodity prices, technical advances in the extraction of raw materials have created a price ceiling.

Secondly, in the 1980s the Conservative government limited the power of the unions and this is still helping to control increases in earnings.

While those two factors are important for suppressing inflation and therefore interest rates, two other factors are helping to keep rates low: demographic changes and technological advances.

Blame it on the boomers

The retiring baby-boomer generation and declining fertility rates have changed the shape of the working population. Those approaching retirement typically need a pension to replace their income in old age and the most common way to generate income for a pension is through purchasing a blend of government and corporate bonds (often referred to as an annuity). Bonds are used because they pay a fixed level of interest per annum, and this forms the building blocks of a portfolio that delivers a set target income.

As more people retire, the demand for bonds increases. Higher demand leads to higher prices for bonds (bond yields have an inverse relationship, so higher prices mean lower yields and vice-versa), which has contributed to the low yield/low interest rate environment.

The extraordinary advances in technology over the past 25 years have completely changed the way we do business. This has helped to reduce inflation, keeping interest rates down.

Because we now do so much shopping around online, and can compare prices in seconds, the price we pay for goods and services has become far more transparent. This has driven prices down over time. Lower prices lead to lower inflation.

The power of politics

During the 30 years before 2009, interest rate policy reflected structural changes in the economy: as inflation fell, interest rates fell in sync. Yet monetary policy since 2009 has been more aggressive, with interest rate cuts being greater than the fall in inflation to force investors away from cash and bonds and intro riskier asset classes like property and equities.

Since then, global economic growth has been robust, for which central bank policy makers cannot be faulted. However, growth has been unequal and the dispersion of wealth has widened. The huge uplift in both property and equity prices has benefited homeowners and investors, while those at the lower end of the financial spectrum have struggled.

The concept of ‘trickle-down economics' suggests that the wealthiest in society spend the most and contribute the most in taxes. As long as their wealth increases this should trickle down to the poorer members of society. However, the evidence suggests that this has not, in fact, occurred.

As a result, there has been a growth in the popularity of left-leaning political leaders, represented by Jeremy Corbyn in the UK and Elizabeth Warren in the US. Both want to reverse growing levels of inequality and this means moving away from loose monetary policy and towards more egalitarian fiscal policy (i.e. taxing the rich, spending on the poor). The most significant consequences of more socialist policy-making could be the elimination of subsidies to asset owners (through low interest rates) and an attempt to redistribute towards the financially disadvantaged and disenfranchised (through more fiscal stimulus).

The election of Corbyn and/or Warren could force markets to rethink. Raising an excessive amount of government debt to inject a large dose of fiscal stimulus may play well to the electorate but could raise concerns over their ability to repay the debt. This can cause international capital to flow out of a country, possibly - finally - triggering higher interest rates.

The structural drivers in play in the global economy suggest that low interest rates are likely to be here for some time. However, in today's polarised political environment, this may provide the catalyst for higher interest rates in the short term.

We don't manage our discretionary portfolios through political forecasting, but it is critical to focus on both the short- and long-term drivers of interest rates. As the economic cycle gets longer and investor uncertainty rises, asset prices become more volatile. We believe the most important way to manage volatility in portfolios is by understanding of the direction of travel for interest rates.

blog comments powered by Disqus
Back to Top